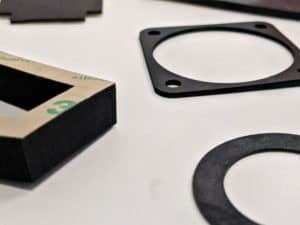 At NEDC we cut a lot of unique materials. One of the more common materials NEDC cuts is fungus-resistant gasketing materials. Nowadays, a lot of people recognize that fungal growth should be a concern when building assemblies. This is well documented because designers know that optical systems, and electronic systems can be susceptible to this if not handled properly. As a result, having fungus resistant gasketing materials is of huge importance. Generally, synthetic polymers are fungus resistant. However, the additives to make the finished product may not always be.

The Specifications for Fungus Resistance

There are two specifications that are used for testing fungus resistance in the gasketing industry. The first is ASTM G21. The second is MIL-STD-810 Method 508. However, it is good to note there is some overlap in the specifications. For example, some of the growth criteria are similar, the duration is similar, among other similarities. The requirement in the specifications details what type of fungi, the humidity, procedure, and other factors. In addition, the specification details out 4 levels of microbial growth:

How is Fungus Resistance Requirements called out?

In regards to MIL-STD-810 Method 508, most times the fungus resistant requirement is called out through a bigger specification. These specifications oftentimes are ASTM D2000, or ASTM D1056. Both standards do not have a specific suffix to call out specifically fungus resistance, but normally use the Z suffix to call out the requirement. Typically this looks something like ASTM D2000 M2BC 610 A14 B14 C12 F17 Z1, Z1= Fungus Resistance per MIL-STD-810 Method 508. It is good to note that while many materials do not support fungus resistant growth, testing should be required to ensure that is true. Generally, EPDM(ethylene propylene) and Neoprene(chloroprene) are the polymers that we see utilized for fungus resistance in the gasketing industry.

In regards to products tested per MIL-STD-810 Method 508, this manufacturer usually sees those in more conventional rubber like materials such as Neoprene or EPDM rubber/sponges.